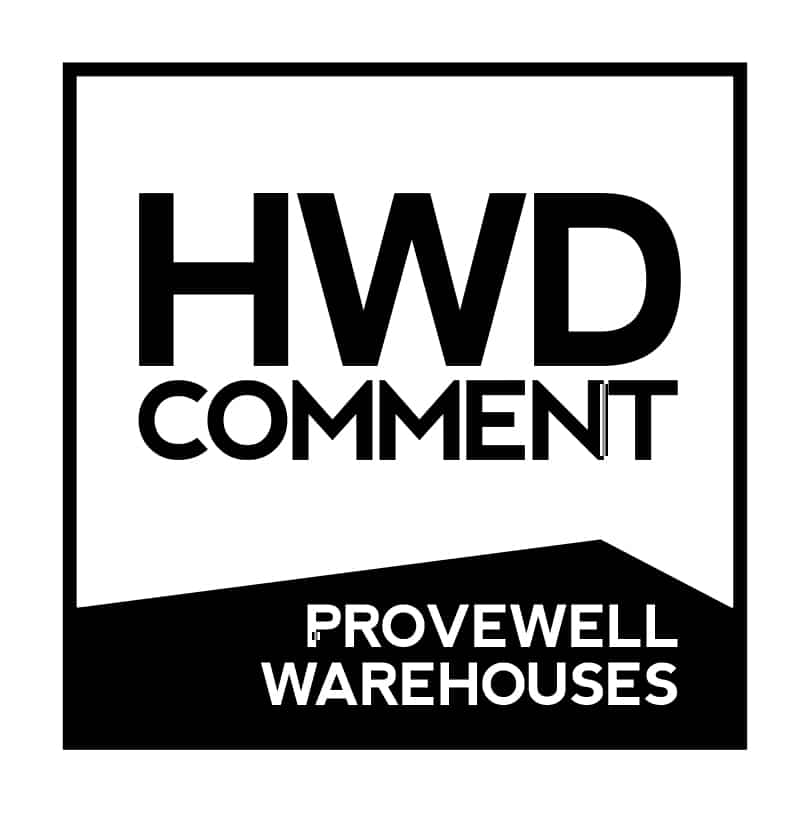 by Hugh Flouch, local historian and originator of Harringay Online

The neighbourhood that’s situated on both sides of the stretch of Green Lanes between Finsbury Park and Turnpike Lane has a name that confuses many. Is it Harringay or Haringey? It’s a long story that goes back half a millennium, but the nub of it is that the longer spelling, Harringay, refers to the neighbourhood in the south of the borough, whilst Haringey is used to refer to the whole borough.

As part of the Harringay neighbourhood, the Harringay Warehouse District uses the longer version. It’s an area with a long history and an industrial heritage that goes back for more than a century.

In the early medieval period, the area now occupied by Harringay Warehouse District was agricultural land owned by the Knights of the Order of St John of Jerusalem.

By the middle of the nineteenth century, as wealthy Londoners accelerated their purchase of land on the outskirts for ‘country’ retreats, Hermitage Road was developed as a private road. In 1869 there were just four large houses on the road.

By the mid-1890’s, the western part of the area had been built up as far as Vale Road and, to the east, the area between Tiverton Road and Seven Sisters Road had been built up. The development of much of the land in between was delayed by ownership or because it was in use for other purposes. This delay apparently paved the way for a commercial rather than residential future.

North of Hermitage Road, next to Green Lanes, the potteries still stood where Sainsbury’s and the Arena Shopping Mall are today. South of St Ann’s Hospital, the area now occupied by the Crusader Estate and the Arena Design Centre had been acquired by the hospital. Accessed via a tunnel under the railway line, it was used as a recreation ground for hospital patients.

In the south east of the area, north of where Eade Road now meets Seven Sisters Road was a large brickfield.  Finally, a large part of the area had been part of The Hermitage estate and that was still occupied until 1890.

Whilst the site of the potteries was to remain vacant until the 1920s and 30s when the Harringay Stadium and Arena were built, the sale of the Hermitage in the 1890s, meant that by the first decade of the twentieth the Ashfield triangle and the rest of the southern side of Hermitage Road had been built-up. In the east of the area, the first four factories were in place by 1913.

The first factories arrived just before and after 1905. Wine gum maker Maynards opened in 1906 and paper manufacturer F Bender just before.

By 1922 Courtney Pope moved growing shop-fitting business to Eade Road, with their Amhurst Works covering most of area now occupied by New River Studios, Catwalk Place and the Ex-Fed building. In the Second World War the firm’s subsidiary, Courtney Pope Aircraft Ltd, manufactured aircraft parts, mainly propellers at 318 Green Lanes behind the old Manor House pub. It is likely that the facilities at the Harringay works were given over to the war effort.

In 1945 shopfitters Frederick Sage & Co Ltd acquired new premises in Ashfield Road. clients included prestigious companies like Selfridges. Their projects included post-war work in the Palace of Westminster following the bombing of the House of Commons.

Omega Works on Hermitage Road housed HK Furniture, one of the UK’s most respected designers of art deco and mid twentieth century furniture. The company were behind the famous Encore chair (on display at the Geffrye Museum), supplied the furniture for the QE2, Marlborough House, the royal train, the Bank of England and even the news desk for BBC South East.

Harringay also saw the development of a range of well-known piano firms, In 1935, at their Hermitage Road factory, Challen built the largest piano in the world to mark the King’s 1935 Silver Jubilee. At 11 feet 8 inches long and weighing over one and quarter tons, the piano held its record till early this century. Having been lost for the past few decades, the piano was recently rediscovered un a French farmhouse and is currently being restored in preparation for a concert.

But Harringay was never a dull boy; it wasn’t all work in the area. At around the same time the factories began to open Arsenal Football Club’s new owner looked at Harringay as a potential site of a new home for the club, In the end the proximity of the tube line meant that the Highbury site won out.  But less than fifteen years later, Harringay Stadium opened on the site, to be followed in 1936 by the Harringay Arena.

After the Second World War, a number of manufacturers in the clothing sector were beginning to set up in the area, including W. J. Roeder, a handbag manufacturer, shoe manufacturer R.Rosenblatt & Sons Ltd and a hosiery factory. A host of smaller textile factories for dressmakers, sewers, packers and button makers soon followed.

But, by the middle of the 1980’s, the end of Harringay’s era as a centre of manufacturing was on the cards. Within just over a decade all the major firms had moved out and many of the smaller businesses began to close too. 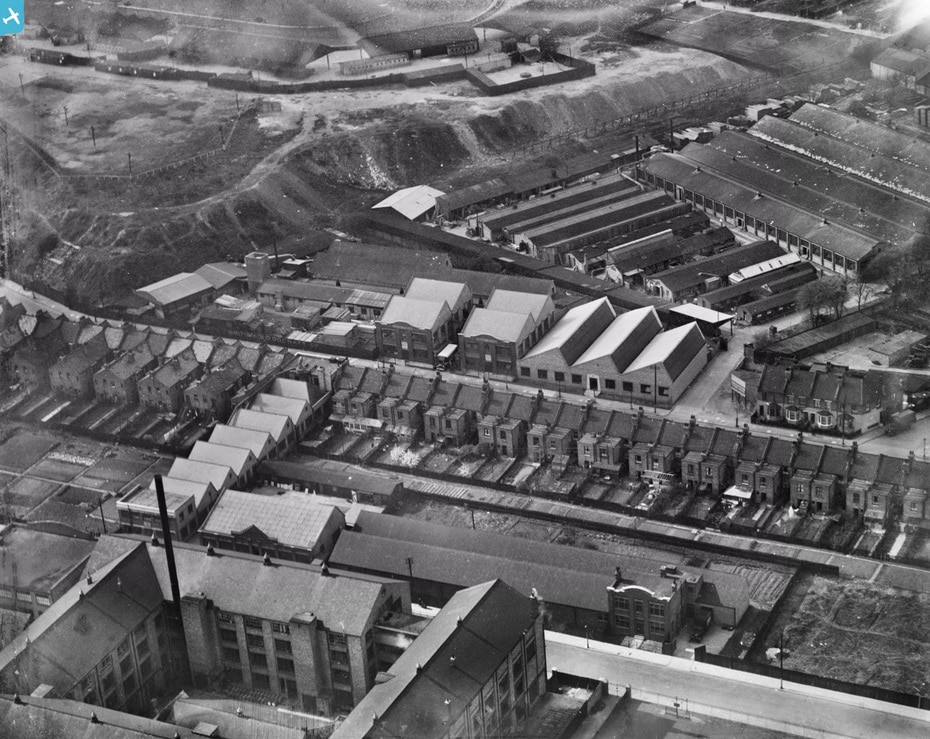 Lookingh across Maynards (extreme foreground), Challen/British Woodcraft Piano Works on Hermitage Road, (centre) and the edge of Harringay Stadium in the top right. 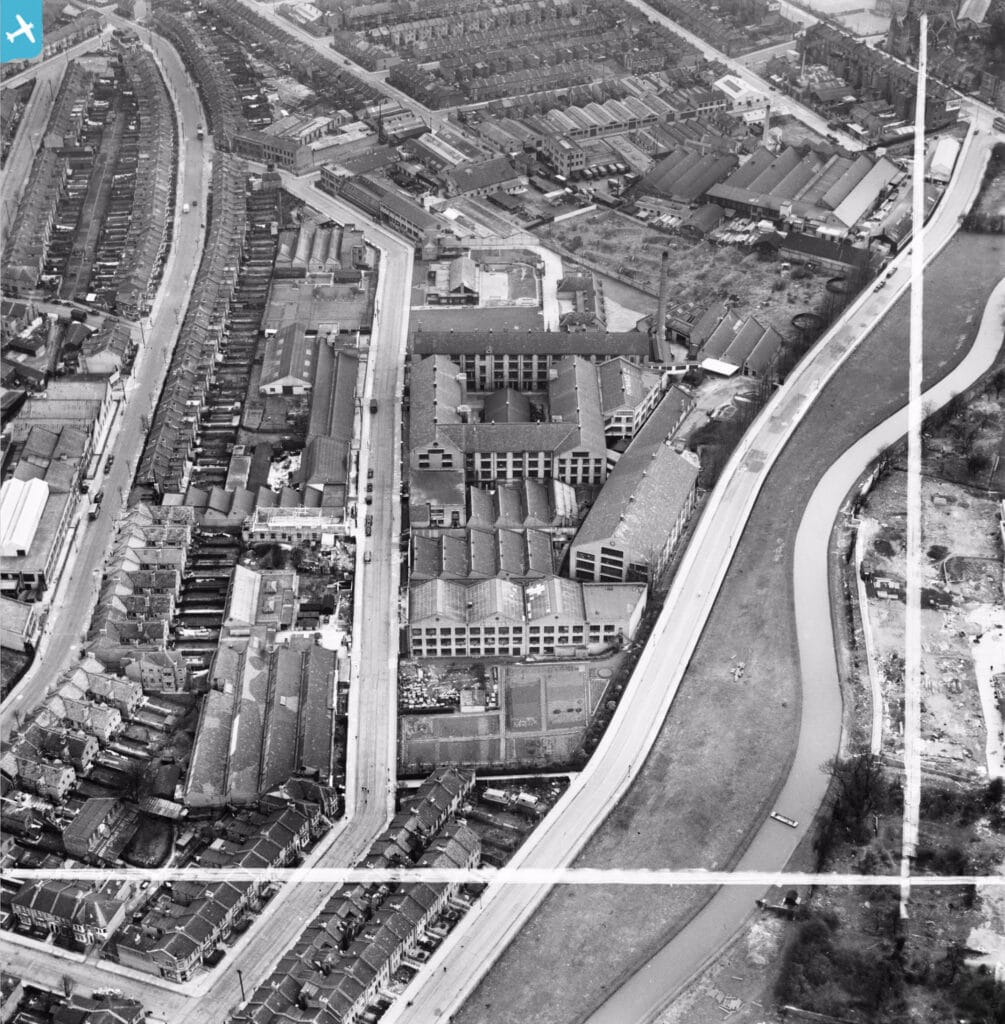 Looking east across the area. Left to right are Hermitage Road, Vale Road, Eade Road and the New River. The large factory in the centre ground is Maynards – (1906 – 1998)

POLL: What is the Warehouse area called?

Receive regular updates via WhatsApp. It’s a one-way group, giving you access to updates without the chatter.

We use cookies on our website to give you the most relevant experience by remembering your preferences and repeat visits. By clicking “Accept”, you consent to the use of ALL the cookies
Cookie SettingsREJECT ALLACCEPT ALL
Manage consent

This website uses cookies to improve your experience while you navigate through the website. Out of these, the cookies that are categorized as necessary are stored on your browser as they are essential for the working of basic functionalities of the website. We also use third-party cookies that help us analyze and understand how you use this website. These cookies will be stored in your browser only with your consent. You also have the option to opt-out of these cookies. But opting out of some of these cookies may affect your browsing experience.
Necessary Always Enabled
Necessary cookies are absolutely essential for the website to function properly. These cookies ensure basic functionalities and security features of the website, anonymously.
Functional
Functional cookies help to perform certain functionalities like sharing the content of the website on social media platforms, collect feedbacks, and other third-party features.
Performance
Performance cookies are used to understand and analyze the key performance indexes of the website which helps in delivering a better user experience for the visitors.
Analytics
Analytical cookies are used to understand how visitors interact with the website. These cookies help provide information on metrics the number of visitors, bounce rate, traffic source, etc.
Advertisement
Advertisement cookies are used to provide visitors with relevant ads and marketing campaigns. These cookies track visitors across websites and collect information to provide customized ads.
Others
Other uncategorized cookies are those that are being analyzed and have not been classified into a category as yet.
SAVE & ACCEPT
Powered by